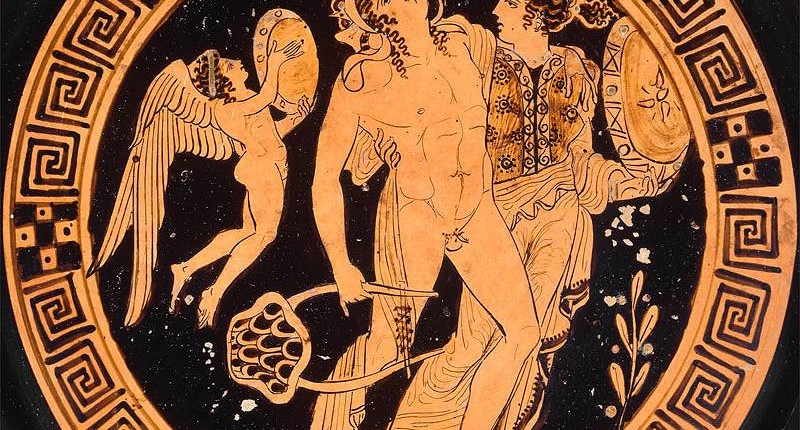 After slaying the Minotaur, the Athenian hero Theseus and Ariadne, the Cretan princess who loved him, stopped to rest at Naxos on their way to Athens. Yet the next morning, while Ariadne slept, Theseus set sail and abandoned her. This, even in the eyes of the Athenians, was dishonorable, especially since Theseus had promised to marry Ariadne in return for the vital assistance she had rendered him in negotiating the Labyrinth.

Various explanations for Theseus ungallant behaviour have sprung up over the centuries. Did he simply forget about her, did he find a new mistress, or did the god Dionysos, who later found Ariadne and married her, desire her from the moment she set foot on Naxos, and warn Theseus away? Historically, some believe the myth demonstrates the rise of alate Cycladic civilization after the fall of Crete; others say that Ariadne, as a priestess of Crete, would have forfeited her rights and authority if she had gone to Athens. Common, however, are the accounts that it was the jilted bride’s curse on Theseus that made him forget to change his black sails to white, inadvertently causing his father’s death in Athens.

In all events, Ariadne lived happily ever after with Dionysos, who taught the Naxians how to make their excellent wine and set Ariadne’s crown, the Corona Borealis, amongst the stars; the Celts called it Ariansrod, where their heroes went after death. The story of Theseus and Ariadne inspired many later artists, most notably Richard Strauss’ opera Ariadne auf Naxos.

Like the rest of Cyclades, the local and original Cycladic civilization developed in Naxos Island...